Question: Is it possible to produce sentences from fart sounds?

Long answer: In his 1722 book The Benefits of Farting, Jonathan Swift suggested that holding in farts caused people to become excessively talkative:

“Words own wind to be their mother

Which, stopp’d at one end, will burst out at t’other.”

The suggestion of a connection between speech and farts has always intrigued us, and we have previously shown that they share many of the same sound frequencies. However, our initial attempts to construct words from farts were not successful.

Our previous hypothesis was that farts, like speech, were mostly identifiable based on their sound envelope, rather than the fine structure of the waveform. This is certainly true for speech – the envelope of one sentence can be mixed with the fine structure of another sentence to create chimeric speech. This is mathematically a mixture of the two signals, but interestingly people tend to hear the sound from which the envelope was taken. We used this method generate a single chimeric word (“Hello”), but sadly the results were unimpressive.

However, further research has suggested that the problem was with the implementation, rather than with the underlying hypothesis. We have therefore revisited the problem, and here we outline a possible solution.

First, we take a speech sound

and express it as an analytic signal

is the Hilbert Transform of s, and

We then extract the speech envelope

We found it helpful to transform the fart sound f(t) by equalizing its amplitude across its duration and looping it to create a longer sequence g(t). We then extracted the fine structure

The chimeric fart speech sound was then simply

Although there is more that can be done, this one small step eliminates a number of problems with the previous approach. Here is an example of an entire sentence synthesized from a single fart. The original sound is shown in the top panel below; the modified fart sound is in the middle; and the chimeric fart is at the bottom. 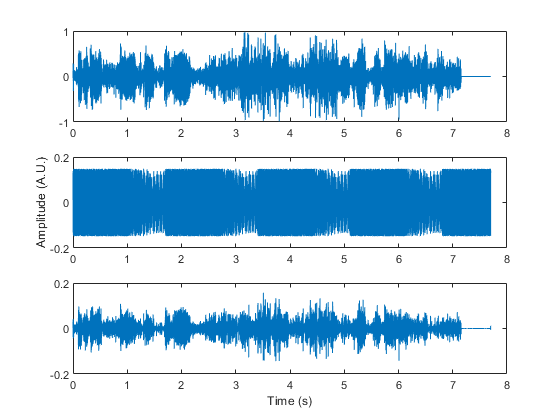 It can be seen that the chimeric waveform approximates that of the original speech. Here is the audio for the chimeric fart:

The original speech audio can be heard here. In a sense, this might have worked too well, since the recording no longer sounds much like a fart. So the challenge for future work will be to generate signals with the communicative power of speech and the acoustic qualities of farts. It’s certainly possible with other sounds, so we will continue to forge ahead in future posts.