Following the initial burst of data collection, the College became dissatisfied with the resolution of the experimental apparatus.

With the capacity to measure fart smell at only a single point in space and with a temporal resolution of 1 minute, it was felt that the answers to critical questions were simply out of reach: Where do farts actually go? How quickly does the smell diffuse through the air? Do smelly farts travel farther?

The need to tackle these questions led to a fund-raising drive, which eventually supported the acquisition of five more air quality sensors, as well as a power supply for the experimental apparatus. This added around $400 to the College’s budget, which was already strained.

The sensors were attached to the collection tube of the Bonaventure, at various distances from the experimental subject. They appear in the photo below as the green and orange lights. 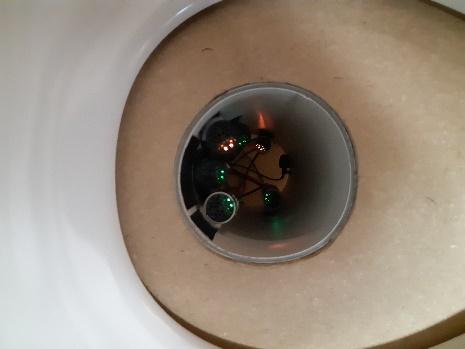 At the same time, a technical breakthrough in the College’s IT group allowed for direct access to the VOC data at nearly 1 second resolution, via the devices’ Bluetooth API. For the first time, it became possible to track the progression of fart smell in space and time.

One of the first farts recorded with this new technology is documented in the figure below. The lines in the plot indicate the VOC levels recorded at different distances from the source and at different time points. Note the time axis, which is now in seconds rather than minutes. The different lines correspond to the sensors placed at different depths within the tube. For this fart, there is a large spike in VOCs near the top of the collection tube, followed by a slow diffusion of stink throughout the medium. These dynamics will be explored in future posts, but clearly the new apparatus was a vast improvement over the original method of data collection. Starting from early September 2020, the College focused on this new approach.