Question: Did Rudolph Giuliani fart during a legal proceeding on December 2, 2020?

Long answer: Apparently there is someone named Rudolph Giuliani, and apparently this Giuliani is rumored to have farted at a legal hearing in December 2020. Being immersed in our studies, we have never heard of the man or his legal pursuits.

But we are always curious about farts, and since even Snopes doesn’t know whether Giuliani farted, it falls to us to figure out what really happened. We have obtained an audio recording of the Event in question and begun to analyze it.

In previous work, we analyzed our database of over 2000 farts and found that the sound frequencies fall outside the range to which the human ear is highly sensitive. Thus, it is possible that listeners mistook some other sound for a fart. But it is also possible that Rudolph Giuliani has a tendency toward anti-social or even depraved behaviors. As stated above, we really don’t know anything about him.

Part of Giuliani’s testimony, including the auditory Event in question, can be heard here:

There are actually (at least) two potential farts in this recording, but here we are only concerned with the first one, which we have isolated:

Our first step was to convert this Event into a time-frequency histogram, using the Morlet wavelet transform. This yields the following auditory content: 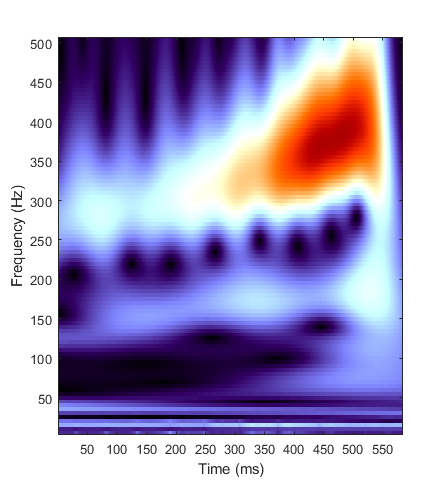 This shows that the Giuliani Event is comprised of a range of sound frequencies, with the peak occurring near 400 Hz. Extracting the data around the peak sound amplitude, we obtain the power spectrum shown below in red: 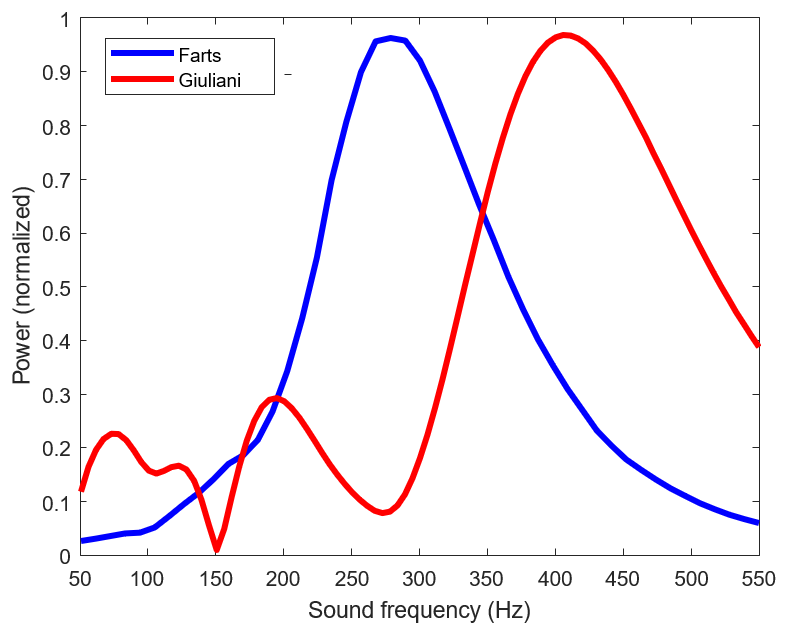 The blue line shows the frequency content of an average fart, taken from our database. These typically have sound frequencies between 200 Hz and 400 Hz, with the highest power being concentrated near 300 Hz. The Giuliani event, by contrast, has most of its power between 300 and 500 Hz, which is not typical of fart sounds.

Thus, we conclude that the frequency content of the sound produced during Giuliani’s testimony is unlikely to have been a fart. And if it was a fart, it was probably not very smelly.

It has not escaped our notice that the frequencies we have isolated suggest a possible mechanism for detecting farts in other sound recordings. Future work will be devoted to the development of a fart filter for automated detection of farts in audio samples.